National Adoption Month Quiz: W hat Do You Know About It? 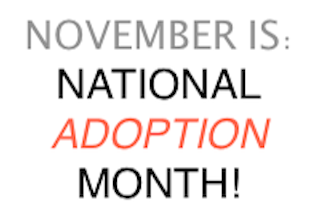 1. The goal of National Adoption Month is:

a. to finalize more adoptions that month than in any other month of the year;
b. to increase placements of children;
c. to raise awareness of children in foster care needing forever homes;
d. to have a big party to celebrate adoption.

2. What state first celebrated an adoption week out of which National Adoption Month ultimately arose?

a. Engage Youth and Listen;
b. Youth Voices: Why Families Matter;
c. In Their Own Words: Lifting Up Youth Voices;
d. Teens Need Families, No Matter What.

5. To honor those who have made a difference in adoption, the Congressional Coalition on Adoption Institute (CCAI) annually names:

The answers to these questions should give a better understanding of how National Adoption Month came about and how it is observed.

Question #1—The answer is c, raise awareness of children in foster care needing forever homes. With approximately, 125,000 children in the foster care system, thousands of youth need a loving, stable, and permanent family.

Question #2—The answer is a, Massachusetts. Then Governor Michael Dukakis announced an adoption week in his state back in 1976. President Ronald Reagan later made the week a national observance in 1984.

Question #3—The answer is b, Bill Clinton. Our 42nd president expanded the observance to an entire month with the issuance of a proclamation on November 1, 1995.
Question #4—The answer is a, Engage Youth And Listen. Answers b, c, and d were the themes for 2019, 2018, and 2017, respectively.

Now that you know more about National Adoption Month, get the word out about it!

We welcome your communication. If you need help with site support or have general questions regarding adoption or the FAC, please use this tool to communicate with us.